How you use Takeout Box for Communal Food Party?

Prior to the pandemic, Pinoy Heritage’s kamayan pop-ups were one of the hottest tickets in town. Chef Francis Ang’s elegant take on these traditional Filipino feasts would feature a lavish spread, all meant to be eaten with bare hands, laid out on a long communal table lined with banana leaves: roast pork belly, double-fried fish, handmade noodles, grilled seasonal fruits, and dozens more dishes. Beyond that, the pop-ups doubled as mixers for Bay Area food lovers — an occasion for strangers to bond over their mutual love of crispy pork skin and reach their hands across the table to politely snag the last bite of lamb stew. 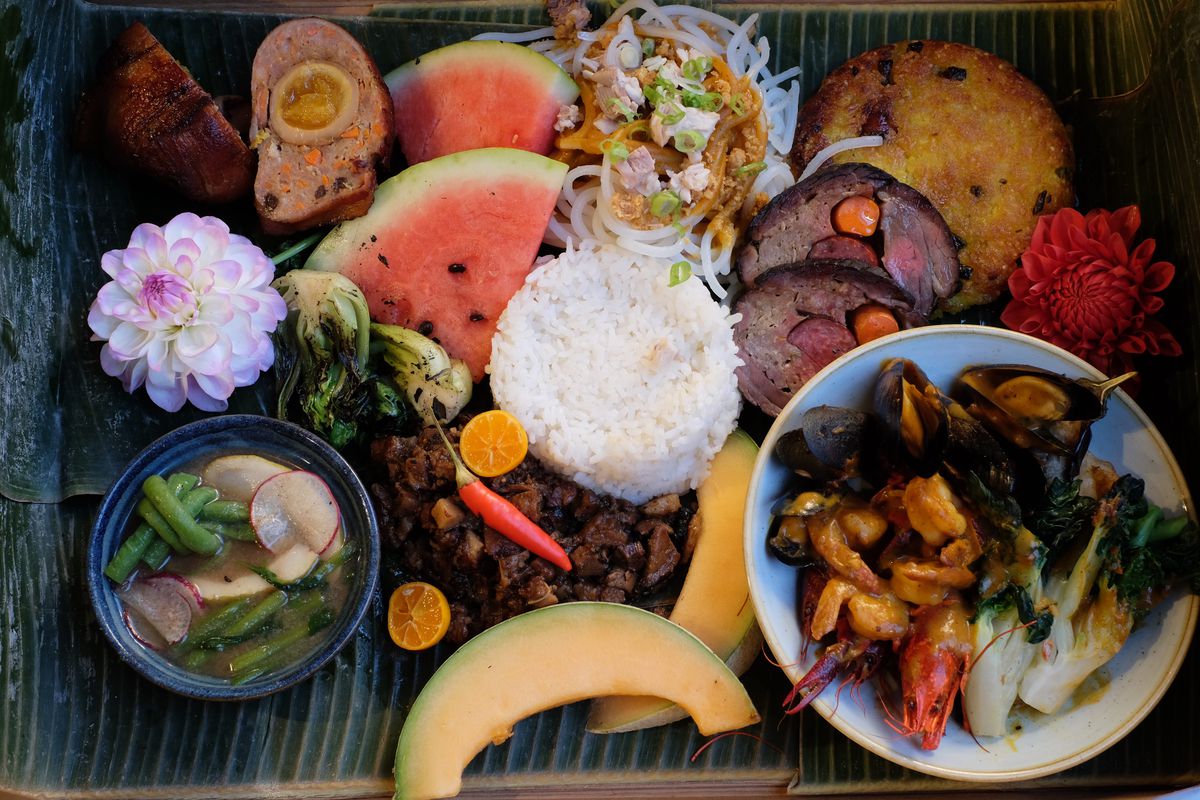 Of course, COVID-19 put the party on hold, as it has done with all in-person, indoor food gatherings. “It’s such a bummer that communal dining is now nonexistent,” chef Francis Ang, who runs the business with his wife Dian, tells Eater SF.

But that isn’t to say that Ang has given up on doing the kamayan feasts altogether. During a time when pop-ups, just like standalone restaurants, have had to drastically reconsider their business models, Pinoy Heritage hasn’t been shy about experimenting with different approaches. Ang has tried a little bit of everything: ambitious, multi-course meal kits for home cooks; everything from bar bites to full-on tasting menus packed for takeout; and, now, a series of monthly, regionally focused kamayan takeout sets — a two-person feast packed up, ready to eat, for $79.98. That’s about half of what Pinoy Heritage used to charge for the in-person kamayan experience, for just about the same amount of food, Ang says.

The next iteration, focused on the cuisine of the coconut-centric Bicol region, will be available this Saturday, September 26. And it looks like it’ll be another gorgeous spread of food, featuring a whole grilled fish and octopus braised in coconut milk.

Of course there’s only so much that the chef can do to keep that communal spirit alive in the midst of a pandemic. To make the kamayan meals as festive as possible, Ang plates all of the food, still warm, on top of banana leaves in a large, half-sheet cake box so that everything’s already beautifully arranged and ready to be eaten as soon as customers slide it onto their dining room table. And he still encourages diners to eat everything with their hands, just like they would at a traditional kamayan feast.

To further add to the communal aspect, Ang says, a lot of customers have been ordering the kamayan feasts along with their friends — and then, in a true sign of these times, all enjoying their dinner together over Zoom.

Meanwhile, the regionality of the meals is part of the educational work that Ang has been doing since he started the pop-up, based on annual research trips that he and Dian take out to different parts of the Philippines. As Ang likes to point out, the country is made up of more than 7,000 individual islands — and there’s a lot more to Filipino food than just lumpia, sisig, and the handful of other dishes that have made it into Americans’ mainstream consciousness. “This specific town may carry a dish,” Ang says. “This town five minutes over, they don’t have that dish.”

So last month, for example, the kamayan feast was focused on Pampagan, the so-called “food capital of the Philippines,” and dishes included pork sisig — which originated in Pampanga — and a crispy-bottomed rice dish called bringhe, which Ang likens to “Pampanga paella.” This month’s Bicol theme will feature mostly dishes made with coconut milk, the ingredient that region is best known for. There will be coconut-braised octopus; whole grilled fish; a steak dish that includes a sauce made with smoked coconut milk; and Bicol Express, a dish in which chiles and pork are braised in coconut milk.

Pacific Cocktail Haven, the pickup point for the takeout meals, also offers a special cocktail to go with each kamayan meal — this month’s, the Thrilla in Manila, is a bourbon cocktail with a coconut cream base.

Black Farmers to get Agriculture Benefits in US

visibility
close Black Farmers to get Agriculture Benefits in US
visibility

The USDA spent a total of $4 billion on the Farmer…

Consumer is the Largest Reason for Land Fillups

ASA as CEO Post Conversion by Censky in USDA