The Future Of Agriculture is High-Tech Greenhouses

In a small town in Eastern Kentucky, the future of agriculture is growing. A 2.76 million-square-foot facility is being created on 60 acres of land which will utilize environmentally-friendly techniques to help feed a nation with an aging farmer population, declining farmland and a changing climate. The region which was previously known for its booming coal-mining industry that brought power to the nation, is now helping to shape history once again. 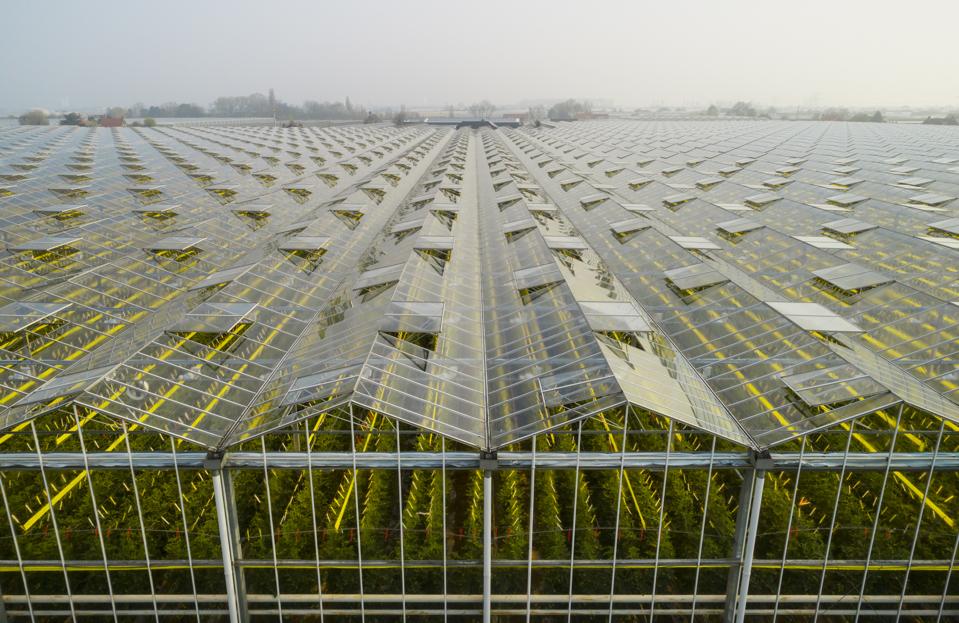 The new future economy of the region could lie in high-tech greenhouses. Not only are they more eco-friendly, but the facilities are also more economically-efficient, and could bring life-support to an overburdened agriculture sector.

The Netherlands has shown itself to be the standard-bearer of this technology. Despite being only the size of Connecticut, it is the second-largest agricultural output in the word thanks to high-tech greenhouses. The country, with only slightly more than 1,300 inhabitants per square mile, is the globe’s number two exporter of food as measured by value, second only to the United States, which has 270 times its landmass.

“Look at the problems facing our planet,” says Jonathan Webb, founder and CEO of AppHarvest, a high-tech greenhouse company in the Bluegrass State. “By 2050 we’re going to need 70% more food. (University of California,) Berkeley says we will need two planet Earths to have enough land and freshwater to produce that food. We got the United Nations saying we have 60 years left of topsoil, before the topsoil is degraded to a point to where it’s not going to be very fertile.”

According to AppHarvest, the eastern region of Kentucky makes an ideal location for indoor fruit and vegetable greenhouses since their products can reach 70% of the American population in a single day’s drive. Company representatives say that the central location will create a more resilient food system, an issue which was thrust onto center stage during the coronavirus epidemic.

Modern greenhouse farming in the Netherlands kicked into gear after World War II as a reaction to one of Europe’s last experiences of famine. In it, close to 20,000 people died in what was coined the “Dutch hunger winter,” during the final months of the German occupation in 1945.

Fast forward to the year 2000, and the Dutch made a national commitment to sustainable agriculture under the rallying cry “Twice as much food using half as many resources.” Since that time, their farmers have reduced the dependence on water for key crops by as much as 90% while eliminating the use of chemical pesticides on plants with the use of greenhouses.

Wageningen University and Research (WUR) are the primary architects of high-tech greenhouse technology, working 50 miles southeast of Amsterdam. The university is akin to Silicone Valley and is considered the top agricultural research institution in the world.

A study by the school found that the advantages of protected cultivation compared to outdoor production of vegetables have a mostly better product quality with higher input efficiencies of water, nutrients and crop protection agents (physical consumption related to level of yield). Moreover, protected cultivation is less dependent on the climate factor and ensures the delivery of products in time. The study estimates that greenhouse horticulture establishments will provide 56.5-58.5 million hours of employment, of which more than 90% is for cultivation labor.

By 2040, Dutch horticulturists are hoping to become climate-neutral, by having a net zero carbon footprint. They will accomplish this through several means: controlling the energy and humidity the greenhouses use; using already-proven heat sources such as geothermal and solar heat; intensifying harvesting; watering more efficiently; preventing plague insects through the use of biological exterminators such as thrips, whitefly and plant louse where natural enemies of pests are introduced to control the pest which is often more effective than chemical control; and including smart windows allowing the glass to insulate in the winter, while cooling in the summer.

“Through technical innovations, we can generate a larger harvest using the same resources (as standard agriculture),” says Frank Kempkes, researcher of Energy and Greenhouse Climate at WUR, about the high-tech greenhouses’ more efficient harvesting. “This motivates horticulturalists to invest in improved greenhouses.”

Traditionally, for example, rows of strawberry plants are placed sufficiently far apart for a person to move in between them. WUR’s greenhouses, however, have an intelligent system that lifts rows of plants individually allowing the university to increase the number of plants by 20% in the same space.

Another example are the light-loving gerberas which are provided with light from LED lamps during the winter. Unlike the previous generation of lighting, LED’s do not generate as much heat, preventing the temperature from rising above desired levels. “This leads to a continuous harvest, allowing businesses to employ a stable and experienced workforce, which contributes to the quality of the product,” says Kempkes.

This increased performance of high-tech greenhouses versus traditional agriculture could end up being what tips the scale in the future of American agriculture.

“It’s forcing this mechanism to bring production indoors,” explained Webb, who expects to grow approximately 40 million pounds of produce a year when the facility is fully up and running. “As far as efficiency, our 60-acre facility will do roughly what 1,500 or 1,800 acres of open field production in California can do. So, you’re going to have 1,800 acres of production on 16 acres of land and you get 30 times the yield per acre, while using 90% less water without the harsh chemicals…I think we’re going to see a lot of people in the renewable energy space move over to agriculture as it becomes more infrastructure-and technology-focused and as we rebuild farms across America. A lot of those skill sets from developing and working on energy technology, translate really well over over to building these these facilities.”

In the United States, the demand for local and organic vegetables is increasing. This is being driven by a growing consumer demand for healthy food and food safety. Unfortunately, the declining availability of labor and increasingly extreme weather conditions make food production vulnerable, presenting a huge challenge for the nation’s agriculture system. Additionally, competition with imports from countries such as Mexico with lower production costs, is a serious threat competitively and environmentally. According to a report by WUR, nearly 20,000 acres will need to be developed in the U.S. in order to bring pepper, cucumber and tomato production back to the country from Mexico.

“It is estimated how large the high-tech greenhouse horticulture in the USA (in terms of acreage and investments) can theoretically have if the imports from Mexico and Canada are replaced by their own production,” states the report. “The advantages of protected cultivation compared to outdoor production of vegetables are the mostly better product quality and higher input efficiencies of water, nutrients and crop protection agents (physical consumption related to level of yield). Moreover, protected cultivation is less dependent on the climate factor and ensures the delivery of products in time.”

Prospective benefits of high-tech greenhouses have also been enough to bring culinary and lifestyle icon Martha Stewart and best-selling author J.D. Vance into the greenhouse game, as AppHarvest recently added the pair to their board of directors. “The future of food will be, has to be, growing nutrient-rich and delicious produce closer to where we eat,” Stewart said upon the announcement.

The Brooklyn, NY-based indoor farming company, Gotham Greens, are also in the process of opening greenhouses throughout the United States. Their new 100,000-square-foot greenhouse located in Providence, RI, will allow them to deliver a year-round supply of local produce to retail, restaurant and foodservice customers across the region. Specifically, the new greenhouse will allow the company to produce more than six million heads of lettuce annually. The company also be opened a 30,000 square-foot facility in Denver, CO earlier this year. In all, the company currently operates eight high-tech facilities around the nation.

“We’re on a mission to transform how and where fresh produce is grown,” said Viraj Puri, Co-Founder and CEO of Gotham Greens at the Providence December ribbon cutting. “Since announcing our expansion into New England, we continue to feel inspired by the city, state and region’s legacy of manufacturing and local food culture. We have received tremendous support from elected officials, retailers, restaurants and our community, who love that we can provide a reliable, year-round supply of fresh and safe produce.”

Webb compares the new route of agriculture to that of energy in the early 2000s. “This is very reminiscent of wind and solar 15 years ago where wind and solar projects were fringe boutique, small industries, and now they’re household names and virtually every state has large operating assets. It happened overnight. There is a real potential that over the next 10 to 15 years, we see thousands and thousands of acres of high tech production built, bringing farms up to date with infrastructure and technology. For the amount of people in this country who don’t really have access to healthy foods, I think this will go a long way into trying to solve that.”

To give Help, Oxford’s Pantry gets Help

visibility
close To give Help, Oxford’s Pantry gets Help
visibility

Frozen food importers are kept on ice as the condi…

The Potential Impact of Coronavirus (COVID-19) for…